Marooned Among the Polar Bears 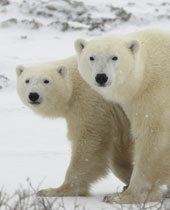 Early last November near Churchill, Manitoba our Quest Nature Tours group was watching two Polar Bears at close-range from the comfort of a Tundra Buggy, a hulky vehicle specially designed to allow us to safely watch Polar Bears, which are the largest of the world’s eight bear species, weighing upwards of 1,800 pounds. They had been unenthusiastically chewing on seaweed on the shore of Hudson Bay where, like hundreds of other bears in the region, they were marooned for four to five months waiting for the surface of the bay to freeze. Unexpectedly our driver received a call from another driver, “You need to get over here, quickly!”

“What could be more interesting than watching these bears?” We all asked and wondered. “You’ll see.” The driver replied.
It took a full ten minutes before we finally saw the object of interest, a large seal laying atop a big, snow-covered boulder a few dozen metres from us. Our driver gestured to the other driver by rubbing his beard, signaling to confirm this was a male Bearded Seal, the largest of the seals found in Hudson Bay.

We were impressed, but something was wrong with this picture. The seal was several hundred feet from the open water of Hudson Bay in the distance. In between lay with a vast expanse of stones just barely covered with water and littered with hundreds of ice blocks. It appeared that the seal had climbed up onto the rock during high tide to rest and then fallen asleep when in the meantime, the tide had gone out. Seals are poorly equipped to make long overland treks and therefore he would have to wait for the next high tide in several hours in order to get back to the sea easily.

The significance of the situation suddenly became tantalizing yet horrific to us – seals are the preferred prey of the Polar Bear! With a sense of smell much better than ours, a bear would be able to detect the seal at considerable distance if the winds were right. And this seal would not be able to escape.
Due to the openness of the landscape, we could still clearly see in the distance the two bears we had just been watching. Would they smell the seal and track it down? The winds were strong but didn’t seem quite right. We waited and watched with bated breath. Another bear directly downwind might smell the seal, or a closer bear might surreptitiously wander by close enough to see it.
Dusk was imminent as the light was fading and we could wait no longer as we had to return to base camp. We left with the knowledge, uncomfortable as it might have been, that several hours of low tide remained and that the rhythms of nature would take their place in this little piece of wilderness.
For the curious: we received reports that there was no sign whatsoever of the seal the next day, so it likely had escaped detection by the bears to live another day.
Obtain information on this fascinating travel destination, plus view a slideshow of photos taken on previous Quest tours by clicking here.
Full Webinar Library