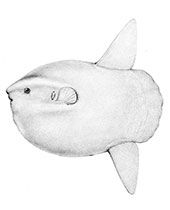 We plan every Quest Nature Tour to take in certain key experiences of each place we visit, but we usually also get some thrilling and unexpected sightings as well – the proverbial icing-on-the-cake. Case-in-point: our recent Bay of Fundy and Grand Manan tour. Our group had set off from Grand Manan Island for one of our two private boat trips. This one focused on seeing the breeding seabirds at Machias Seal Island, specifically Atlantic Puffins and Razorbills, in addition to a variety of other seabirds and seals. Though we’d likely have been quite content with just seeing those, little would have prepared us for the sight of a huge, flattened moving object in the waters below.
Mola mola, this exceptional fish has a most unusual body plan in being essentially circular – it basically looks like a giant fish head with fins! 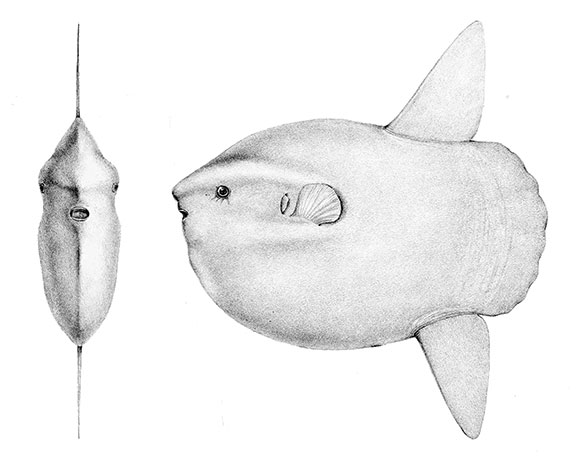 Above: Engraving depicting the front and side view of an Ocean Sunfish, from a 19th Century Danish-language treatise, Spolia Atlantica. Bidrag til Kundskab om Klump- eller Maanefiskene (Molidae)
It can also grow to immense sizes, upwards of 3 metres front to back, and 4 metres from top to bottom! An adult can weigh from 250 – 1000 kg, making it the heaviest bony fish in the world! 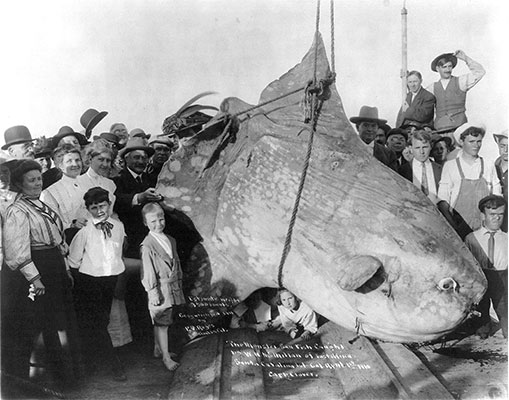 Above: Ocean Sunfish caught in California, 1910. (Credit: Library of Congress, Prints and Photographs Division)
Its diet consists chiefly of jellyfish, and when not actively pursuing its prey, it will often bask on its side near the water’s surface. This “sunbathing” habit – the inspiration for the name ‘sunfish’ – is exactly how our Quest group found it!

The Ocean Sunfish is distributed worldwide throughout tropical and temperate waters. It is not altogether rare; however, the Bay of Fundy is at best on the periphery of its range, and there have only been a handful of previous sightings here. Even where it is relatively common, most people generally spend lots of time on the ocean before encountering one. None of our group had racked up sufficient prior ocean time, so this creature was both new AND unexpected for everyone. We had several minutes during which to watch it coasting along; our traveller Janice shared her pictures here! 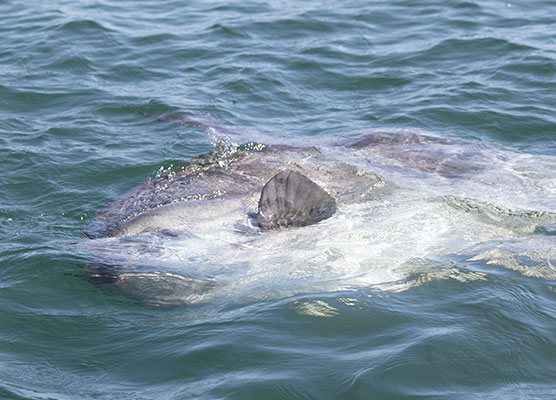 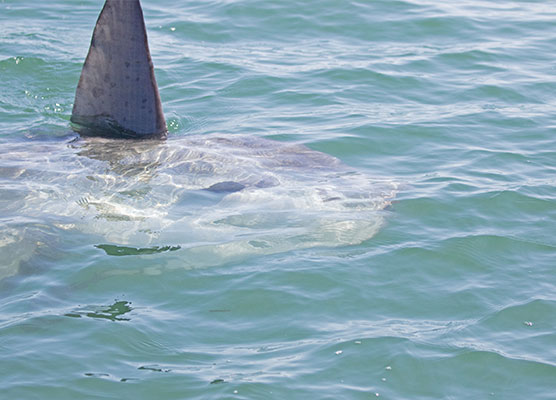 The individual our Quest group saw was by no means a record holder for size, but the sighting will surely be a memorable one. Since then, apparently the expression “Holy Mola!” has gained currency among those who were lucky to be there!

While we can't promise another sighting of the Ocean Sunfish, we will be looking for one on our next Bay of Fundy and Grand Manan tour in 2019! Click here to learn more.