The Little Rann of Kutch 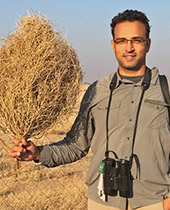 The Little Rann of Kutch: Sometimes Land, Sometimes Water, Always Amazing.
One of the things I love about India is its incredible regional diversity. It had always been a dream of mine to include my ancestral state of Gujarat (“Goojraat”) on a full-feature India natural history tour. This region of westmost India is home to phenomena that I’ve believed many keen travellers would enjoy tremendously. Since then, our tours have visited a few times, and one of my favourite locations here is the Little Rann of Kutch. This vast and flat, low-lying area of over 5,000 square kilometres in northern Gujarat is part of a larger area called the Rann of Kutch. “Rann” means something akin to “salt marsh”, and the Rann of Kutch also includes a Great Rann of Kutch to the north. The Little Rann of Kutch is largely inundated during the monsoon, forming a huge brackish water lake as saltwater from the nearby ocean is able to invade and mix with the accumulating rainwater. By the time we visit during the winter months, much of that water has evaporated, leaving behind mud that dries and cracks and makes it appear simply inhospitable. But that isn’t quite the case. The salt flats of the Little Rann of Kutch are studded with little raised islands of scrub that have sheltered various land animals during the rains. In addition, the waterways and the flats themselves also attract their own complement of wildlife. What are some of the interesting inhabitants we find here?

It might surprise you to learn that there is such a thing as a wild donkey, but indeed, the Asiatic Wild Ass is a real thing. This dweller of vast, arid regions has undergone a dramatic reduction in numbers across its range. The Indian subspecies (called Indian Wild Ass) became confined to the Little Rann of Kutch some time ago and probably survived owing to the fact that this simply is not arable land. 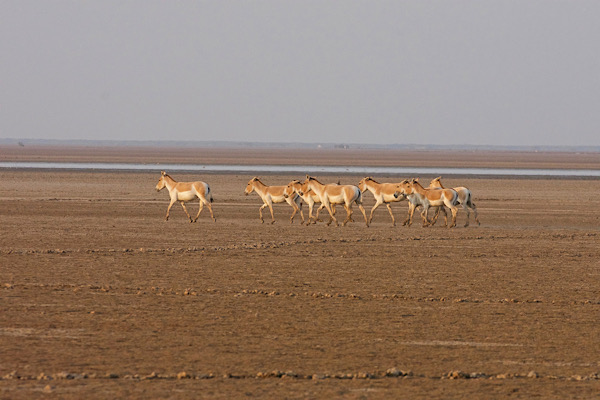 A herd of Indian Wild Asses ambles across the salt flats. 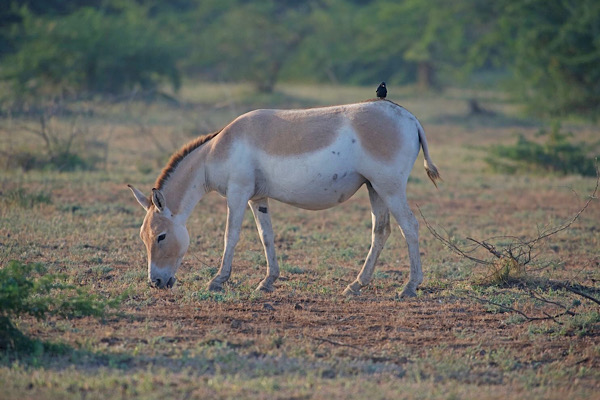 The portion of the Little Rann of Kutch that we visit is the official Indian Wild Ass Sanctuary, and owing to the explicit protection received, the animal’s numbers are seeing a resurgence. In recent times the population has hovered around 4,000 individuals and is expanding towards the north. It remarkable in extracting a living from the meagre vegetation of the Rann, including short, salt-tolerant succulent plants. Seeing a herd of these animals galloping at high speed across the mudflats is awesome!

We usually associate hyenas with Africa, and while there are three species there, one of them – the Striped Hyena – ranges well into India as well! Smaller and thinner than the well-known “laughing” Spotted Hyena of Africa, the Striped Hyena feeds preferentially on meat but is largely a scavenger, collecting bits of dead animals and bringing them back to its den. It is mainly nocturnal. In the Little Rann of Kutch, it builds permanent dens in the earth of those raised scrub islands I mentioned. One of these scrub islands was the site of a remarkable encounter on my last tour, when we were able to witness three Striped Hyenas at close range. Prior to sunset, our local guide led us towards a known den site set deep within the scrub. Bones of scavenged prey were scattered about. We could just see the entrance to the den, which was in an area of cleared earth, a large hole with broad raised rim surrounded by scrub. At a good 15-metre distance from the den and behind a veil of thorny mesquite, we sat down in two tight rows on the ground and waited… The light dimmed and the sun set. It was not the most comfortable experience but we waited patiently without shifting or uttering a peep. Then finally, one hyena appeared by the hole, then another, and then a third. It seemed that they had approached the den from beyond it and not come from within. They sniffed and sniffed about, seeming almost curious about their own den as we were. One of them sat down. We were in complete awe of them as they seemed unaware of our presence. After several minutes, the hyenas left as quietly as they had appeared. We then stood up quietly, one by one, headed to our vehicle, feeling immensely privileged to have been in their presence, especially given the complete silence we had experienced save the loud beating of our hearts!

One of the three Striped Hyenas investigating the area of its den. Out of respect for the animals, we took no photos so as not to disturb them: 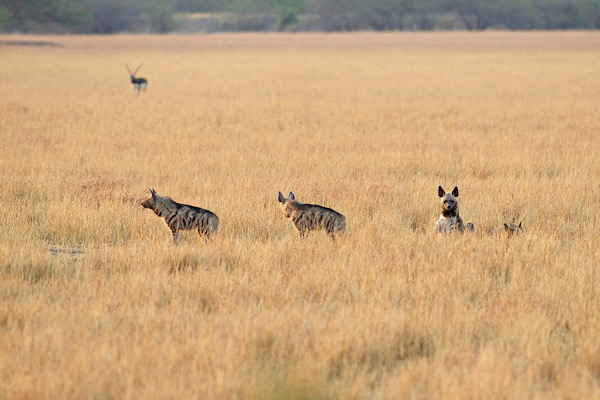 Striped Hyenas as they appear during daylight, photographed another day in another
reserve.
A Rosy Tempest 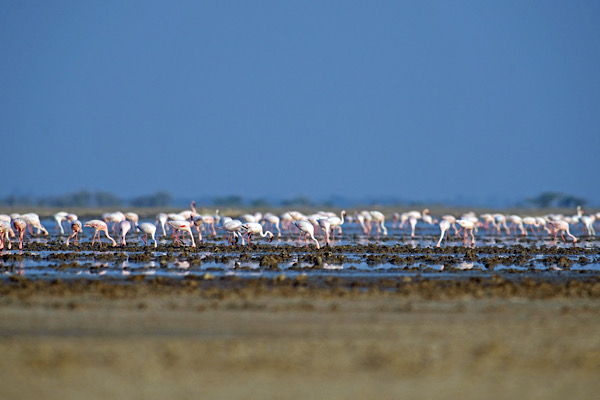 India is home to two flamingo species, and the Lesser Flamingo – the one we most frequently see depicted on television documentaries on Africa – finds a surprising stronghold on the Rann of Kutch, far removed from its core range in Africa! In fact, this region is the only place in Asia where they breed. The extent and shallowness of the Little Rann of Kutch’s brackish waters during the monsoon is perfect breeding habitat for these birds. As the waters recede during the dry season, the adult flamingos and their fledged young concentrate. Some birds overwinter along the coast of west India down to Mumbai and beyond, but many remain, and the effect they create during their flights can be dramatic.

We had a chance to witness a particularly nice display during our last tour as we parked on the flats and surveyed the area. There was a flurry of birds in the distance, ebbing and flowing over the salt flats. We fixed on the flock but were for a time at pains to identify them, till the flock stretched out and their long necks and legs betrayed their identity. At surprising speed, the phalanx of flamingos came around towards us and overhead, and we could hear their voices and wingbeats.
The flock of Lesser Flamingos making a pass overhead. Turn on your sound to hear them. 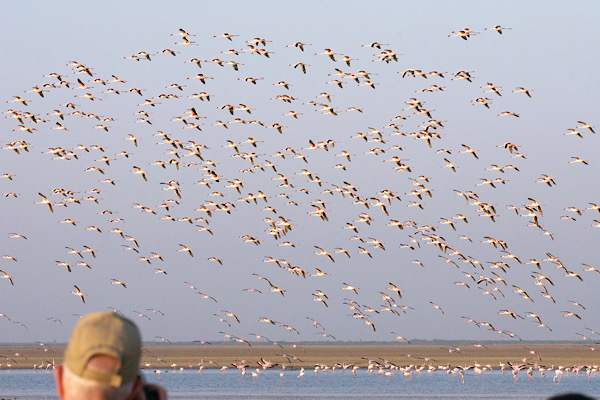 The flight of flamingos can be arresting.
Fascinating tidbit: Genetic studies of Lesser Flamingos in Africa and India confirm that the birds are well capable of making the flight between Kenya and the Rann of Kutch. Despite their apparent isolation, perhaps 2-3 birds per generation “re-settle” from one area to the other (and vice-versa) to breed, ensuring, genetic exchange between the two populations!
We’re thrilled to be heading back to the Little Rann of Kutch during our tour to India in February 2021 with Chris Earley at the helm. Besides the "LRK", we'll have chance for many other wonderful experiences elsewhere, including searching for Bengal Tiger, Asiatic Lion, and Leopard, innumerable birds, and wonderful landscapes as well. 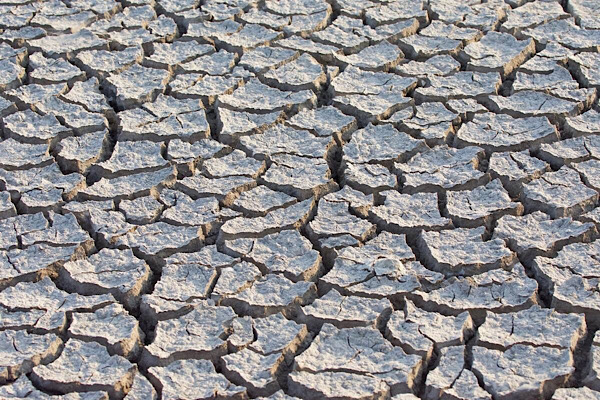 The dry ground salty ground on the Little Rann of Kutch.
Join us on this tour from Feb 23 - Mar 15, 2021!
Traveller Photo Feature