What Makes Bali's Temples So Special 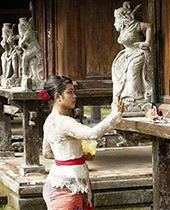 Bali’s thousands of Hindu pura (temples) are unique with multiple festivals, symbolism, architectural features, and offerings being associated with each. They are an integral part of Balinese culture and so special to natives and tourists alike. But why?

Bali is home to over 20,000 temples
Temples are literally everywhere in Bali. Many of the island’s major tourist attractions are elaborate temples like Taman Ayun or Uluwatu. But there are also smaller ones in sleepy rural villages and in each family compound. 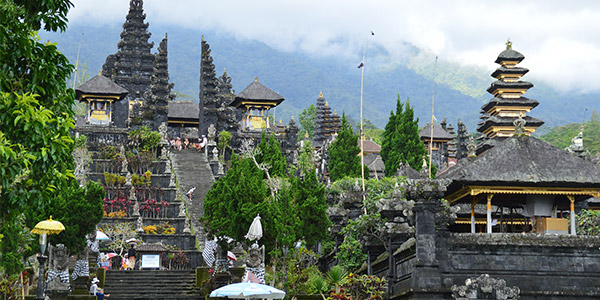 The holiest of all temples in Bali, the "Mother Temple" of Pura Besakih (pictured above) is located approximately 3,000 feet up Gunung Agung in East Bali. This sprawling complex consolidates 23 separate temples, some dating back to the 10th century. The temple's main axis aligns with the peak of Gunung Agung, the tallest mountain and holiest site in all of Bali.
Temples are divided into three parts
Balinese temples, or pura, have strong associations with the number three. Each temple has spaces of worship for Hinduism’s three prominent deities: Brahma, Vishnu and Shiva. And within the context of a Balinese village, there is also something called the ‘three temple system.’ Temples are divided into three spaces: 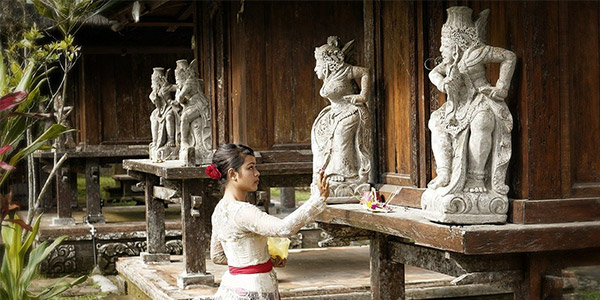 The first part is Hutama Mandala, also known as the middle part or yard. Those who want to pray are allowed to visit this section, which also hosts a variety of sacred artworks, statues and symbols of Hindu deities.

The next section is Madya Mandala, where semi-sacred art is kept, such as puppets, masks and barong (lion). Cooking for temple purposes is usually done in this area as well.
Next is the outermost part of the temple, namely Nista Mandala. Everyone can visit this section, including those who do not intend to pray, such as tourists. However, there are still some special rules that apply to people visiting Nista Mandala.

Architectural Elements
When visiting one of the thousands of Balinese temples, you’ll encounter a variety of elaborate gates, shrines or other interesting looking structures. There is a lot of variation that can occur with the architectural elements in the temples.

But there is one thing all Balinese temples have in common. It is that they’re all open to the sky. The reason is so that the gods being summoned during special ceremonies can descend from the heavens into the temple before eventually returning home. 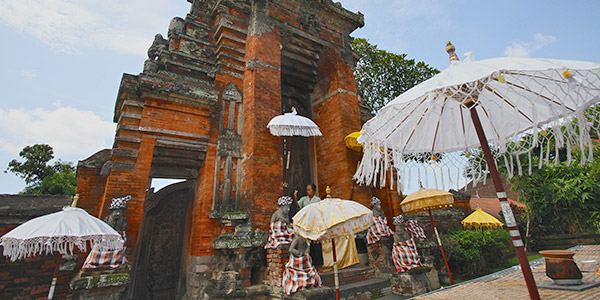 Some examples of other architectural elements and their meanings include:

Candi Bentar (split gateway): The two sides represent the Balinese concept of duality and the importance of maintaining a balance between dark and light forces. The candi bentar also has roots in the legend of Mt. Meru, a mythological mountain where the gods dwell.

Meru (thatched roof): Aside from the temple gates, the most distinguishing characteristic of Balinese temples are their multitiered pagodas of varying numbers of thatched roofs. Different towers may be dedicated to different gods, or sometimes even individuals or local mountains. Meru towers have either 3, 5, 7, 9 or 11 tiers – a sequence of numbers considered sacred not just in Bali but in cultures throughout the world. It’s said that a Balinese temple’s importance can more or less be determined by the height of its highest meru. 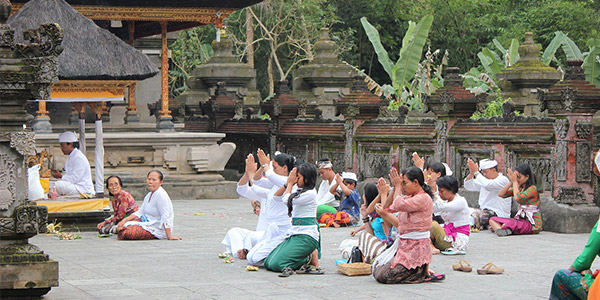 Odalan Ceremonies
With so many temples on the island, there’s a good chance that at least one Odalan, or temple anniversary festival, is always happening. Temple festivals are held on the anniversary of when the temple was consecrated and usually on a new or full moon, usually lasting for three days.
Generally, what happens at an Odalan is that the Balinese honour the deities that rule over the temple by giving them a myriad of offerings, performances of vocal music, dance and gamelan music.

Rules, etiquette, and dress codes for temple visits
Follow these tips when in and out of the Balinese temples:
• Dress modestly, keeping your upper body covered (at the very least, sleeves covering your shoulders). Flip-flops are perfectly acceptable, so long as the overall look is modest. Items are usually available for rent at most temple entrances.
• Don’t use your left hand to touch or give. This precaution has to do with the left hand being used primarily for hygienic purposes.
• Don’t use your index finger to point or to beckon. If you need to call attention to someone, beckon him/her to come by extending your hand and, with palm facing down, making a downward wave. If you need to point at something, loosely grip/cup your fingers and point using your thumb instead of your index finger.
• Check before taking photos. Most temples do allow you to take photos but try not to get in the way of worshippers and turn off the flash.
• Don’t step on offerings (canang sari) in the street. Canang sari are offered to the Creator by locals first thing in the morning. When stepping out, you’ll find these little packages of woven palm leaf, flowers and herbs everywhere, even on sidewalks and stairs. Stepping on one can be deeply offensive. 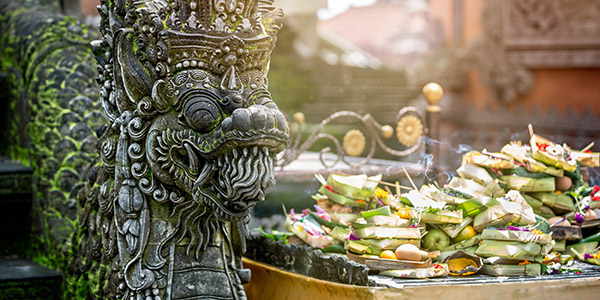 The unique and wonderful reasons why Balinese temples are so special are almost as numerous as the temples themselves. Each visitor is sure to discover a special connection for themselves.