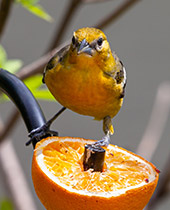 She swooped into the feeder and perched, sampling the skewered orange slice. She couldn’t see her mate at the moment, but she knew he was nearby, actively defending their chosen territory from other orioles. He had arrived almost a week before she had to claim this territory, and she approved of his choice. She had selected an outside branch of a nearby elm tree to build her nest in, just over 10 meters up. Over the next week, she collected plant fibers, hair, and string—some stolen from neighboring nests—and wove them into a pendulous nest. Once the outer bowl was constructed, she perched within the inner cup, shaking and resettling herself in an effort to shape it just right, lining it with feathers and milkweed seeds. She would incubate four grayish, brown-blotched eggs for the next twelve days.

From her vantage point, her head just barely peeking out, she could see everything that happened in the yard below. The Downy Woodpecker on the peanut feeder, the Gray Catbird carrying vegetation to line its nest with, the pair of Carolina Wrens who sang incessantly, and the people who replenished her preferred oranges. They were busy—two young kids, a dog, a substantial garden—but they still found time each morning to drink their coffee on the porch and scan the backyard with binoculars. 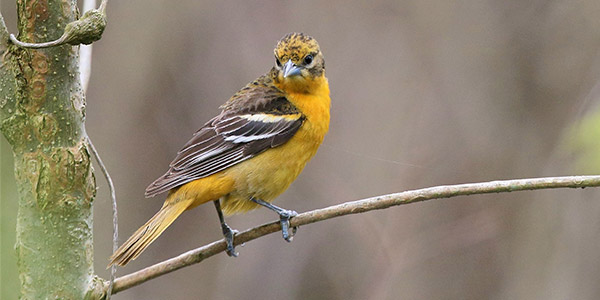 Photo by Gabriel Foley
They were looking for birds. More specifically, they were looking for breeding birds, like herself. They were part of a community science project documenting the distribution, abundance, and timing of the area’s breeding birds. It was called the Maryland & DC Breeding Bird Atlas 3, and they were clearly enjoying it. They had signed up for a block—a 5 x 5 km square—and were recording the behavior they observed each bird doing, using a series of codes. The Downy Woodpecker at the feeder was in habitat where it might breed, so it was a code H: in the right habitat; the Gray Catbird was carrying plant matter for its nest, so it was a code CN: carrying nesting material; and the Carolina Wren duet so busily singing was a code P: a male-female pair.

The data they were collecting would be combined with that from hundreds of other volunteers, and together these data would form a region-wide map of where each species nested. This map could be linked with habitat to show where the most important nesting locations were; it could be compared to previous maps, and show whether populations were increasing or decreasing; it could even be used to show how the timing of nesting was changing. It was immensely valuable information. 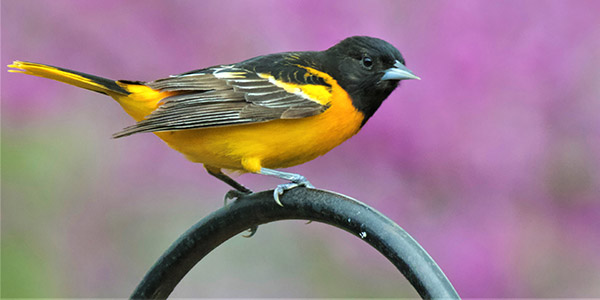 Photo by Jordan Rutter
The couple watched the oriole fly from their feeder back to her nest and perch briefly on the nest lip.

“What is this yellow bird? Can you check the bird guide?” she heard him say.

“What a beauti—oh! Oh! Look at what I just found! See what she’s perched on?”

The woman raised her binoculars again. “I think so… oh my gosh! It’s an oriole nest!”

The couple chattered on excitedly about their new find; the oriole ruffled her feathers and settled onto the eggs beneath her. For the Atlas, she would go down as one data point among millions, but, for this couple, she would remain an outstanding observation that would excite them all summer long.

If you would like to learn more about the Maryland-DC Breeding Bird Atlas, you can visit the website ebird.org/atlasmddc or follow the project’s progress on social media at @mddcbba3!

P.S. Join Gabriel Foley in October 2020 as he returns to the land he has worked on and still loves, Saskatchewan, for our In Search of Whoopers tour! Click here to find out more.
Traveller Photo Feature