The Largest Adobe City on Earth 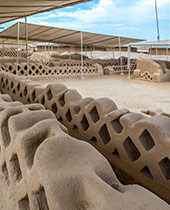 Did you know that rising out of the sand a stone’s throw from Peru’s Pacific Ocean coast is the largest adobe city on earth? The Chimú forged one of the largest empires in the history of the Andes and influenced their more famous successors, the Incas.

The Chimú civilization was founded around 850CE by a ruler considered to have been born from a golden egg and arrived from the sea. Water, its abundance and its scarcity, defined the civilization which reached its apogee between the 12th and 15th centuries. 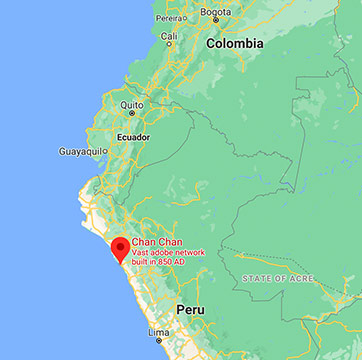 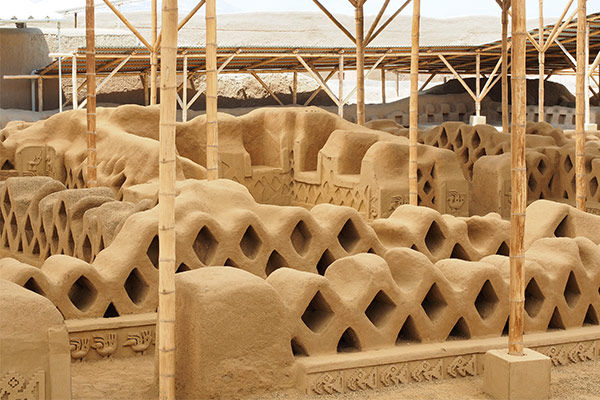 The Chimú were great engineers. They faced the challenge of the coastal desert location by building a sophisticated network of irrigation canals and wells and diverted water through a canal from the Chicama River some 70km away. 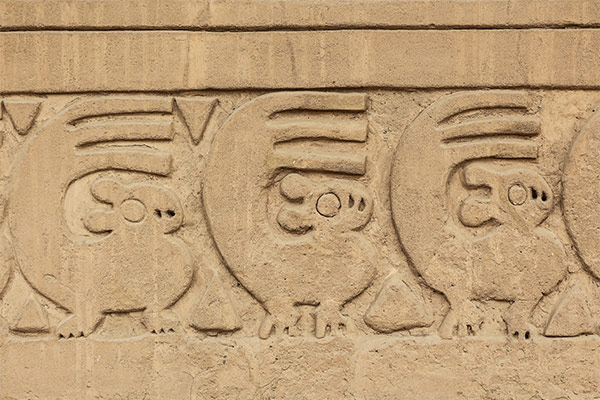 Reliefs of squirrel in the Tschudi Temple, Chan Chan
© Bernard Gagnon
Water also figured prominently as an artistic expression. Palaces and temples were decorated with elaborate friezes, often depicting the cornucopia of fish, crustaceans, and mollusks harvested from the nutrient rich waters pushed up by Peru’s Humboldt Current. Archaeologists believe that the Tschudi complex was most likely built to honour Ni, the Chimú god of the sea and some of the most beautiful decorations depicting pelicans and fish are carved into the mud walls here. A reservoir in the centre of the complex was thought to have been used for religious ceremonies worshipping water and fertility. 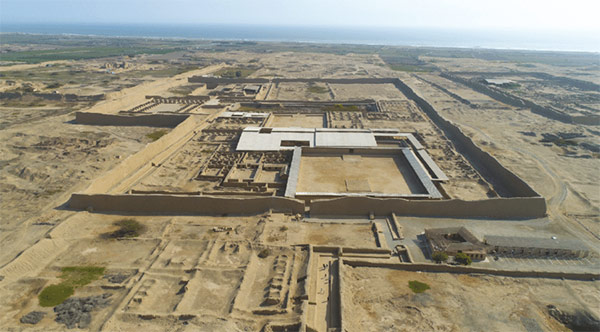 Aerial view of the Chan Chan citadel
© Dirección Desconcentrada de Cultural La Libertad
The archaeological complex of Chan Chan spreads over 500 acres and includes some ten thousand monumental structures amid a maze of passageways and streets. The vast city was divided into nine citadels delineated by high earthen walls. Within each citadel are dwellings, storehouses, open market spaces, palaces, reservoirs, and funeral platforms and around these nine complexes were a further thirty-two compounds and four production sectors for activities such as weaving, woodworking, and metal working. Walking through the site offers a fascinating glimpse of a very well-organized city.

Chan Chan’s glory days ended around 1470 when the Inca conquered the city, breaking up the Chimú Empire and bringing its craftsmen to Cuzco to continue developing their magnificent art. What was left of the silver and precious metals was later pillaged by the Spanish conquistadors. Today, the site still evokes a sense of the vast riches of this mysterious ancient civilization. Water continues to challenge the site; as the climate changes, increasing rainfall threatens the mud buildings. UNESCO is working hard to set up tents to protect and preserve the site.

Machu Picchu has possibly been loved to the point of exhaustion. For a very different experience, we will be looking at the exquisite (and much less visited) pre-Columbian sites of Northern Peru in spring 2022. Please consider joining us!
North Peru: Lost Treasures of the Americas
April 1 - 14, 2022  |  Learn more
Webinar Library