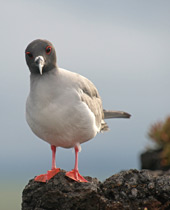 It was a little past 10 o’clock at night and the air was balmy and pleasant. We had had a satisfying first day of discovery in the Galapagos and all of us aboard the M/Y Beluga had retired to our cabins as our vessel transited towards the island that we would visit the next day. I was in my cabin adjacent to the upper deck, still awake and seated comfortably with the lights switched off as I reviewed photographs of the day’s sightings on my camera. Suddenly and from the corner of my eye, I caught a glimpse of some bright wing-like objects eerily flapping at eye-level outside my window at the ship’s port side! These “wings” – of what I assumed must belong to a bird – were beating in synchrony in almost complete darkness and following us at our vessel’s speed. I sat fully upright. Somewhat perturbed, my mind raced through the possibilities of what I was watching. I focused in and could discern the shape of a bird’s body in between the wings and I reasoned that this could be none other than the Swallow-tailed Gull. It was a bird I had never previously seen and was hoping to encounter in earnest on this tour!

Before I say more, let me assure you that that the Swallow-tailed Gull is no ordinary “sea gull”. Breeding almost exclusively in the Galapagos, it has a sooty-grey head and dark beady eyes encircled in red tissue that lend it a quizzical appearance; a forked tail; and a striking black, white and grey wing pattern, that all combine to make it singularly attractive. And its behaviour is also quite peculiar. It is the world’s only gull that forages exclusively at night!

I jumped to my feet and quickly stepped outside onto the upper deck to get a better look at it. With the assistance of the faint glow from the lights at the ship’s bow, I was able to discern the unique plumage pattern with binoculars. Indeed, it was this bird that I looked forward to seeing! It flew alongside us for over an hour; occasionally dipping down to the water for what I could only assume was one of its preferred food items of small fish or squid that frequent the water’s surface at night. Perhaps our vessel’s lights made it easier for the gull to see its prey, and this could be the reason it was following us. I watched in wonder for over an hour. The gull was still following us and foraging when I finally went to bed after 11 o’clock!

We would have the opportunity for much better views of Swallow-tailed Gulls during daylight hours and in a variety of situations in the coming days. As with most Galapagos wildlife, they are rather fearless and allow for close-up views, thereby providing an intimate portrait of their lives. We would witness and photograph various courtship behaviours, incubation, young and fluffy babies, older and almost independent young, confrontations with each other and other species, and birds in flight.

The Swallow-tailed Gull is just one of the many fine sightings one can make in the Galapagos. There is still time to join us on one of our upcoming tours! View upcoming Galapagos departures here to begin your own adventure.