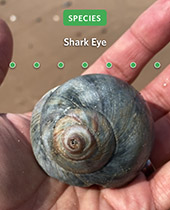 Having been far away from any ocean for over a year and a half, I relished the recent opportunity to breathe in deeply the “sea air” on the Magdalen Islands. An offshore municipality of Quebec, these islands located in the Gulf of St. Lawrence seem familiar yet remote, and walking their wild beaches would be a welcome experience. While I had the mental search pattern for higher life forms in mind – notably birds and mammals – it was the unfamiliar items I found there that ended up consuming most of my interest and that turned what could be a simple beach walk into a discovery trail; an assortment of bivalve shells such those of clams, snail shells, stranded jellyfish, an assortment of seaweed, strange stones, and more. In sum, exotic marine items that give just a glimpse of the mystery of the ocean’s depths.

Ordinarily they would be simply interesting to look at for me, and the effort to identify them and learn about them in any greater detail would be a serious undertaking and something I probably wouldn’t pursue beyond a cursory glance. I’m not fully versed with “lower” marine life forms beyond an acquaintance as they are neither items that I’m readily exposed to nor that I’ve studied in depth. However, on this one trip, I employed an app that helped to make my finds quite a bit more interesting. I used Seek. This app allows the user to scan an organism with one’s phone and have it identified in real time.

How does it work? You simply open the app and scan an organism with your phone. Take the following example of a beautiful blue (if slightly damaged) bivalve shell that I found: 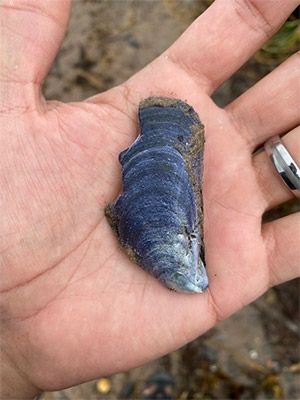 I scanned it and Seek was able to identify it to the species level as the Blue Mussel!

After scanning and identifying it, I could then take a picture to record my sighting. The app keeps track of all the different new species that I’ve found and photographed and informed me that this was a new species for me.

It then provides a link to more natural history information of the organism, such as its habits, taxonomy and distribution, allows you to keep track of all of the sightings you make and sorts your sightings into categories. You can revisit your finds to read more when you have more time.

Seek keeps track of your sightings for you, allowing you to revisit them and get more information later.

In addition, your sighting becomes part of a repository of sightings of the species in question. You can view sightings made by others and get a sense of the global range of that organism. Seek is essentially an identification aid, encyclopedia, and record book all in one! Depending on conditions, it can’t always identify an organism all the way down to the species level, but it will usually at least provide the family or genus, giving you a good lead to you if you’d like to pursue the mystery.

The Seek app is free and available in the App store and at Google Play. I have found it to be remarkably good and especially so on invertebrates including a range of insects. Try it at home. I think you will be amazed at just how good it can be!

Below are a few other finds from the beach on the Magdalen Islands…and a couple of mysteries for you to ponder as well! 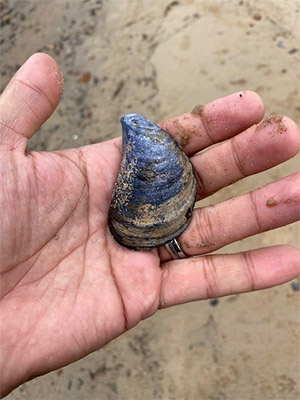 Another Blue Mussel shell, this one undamaged. 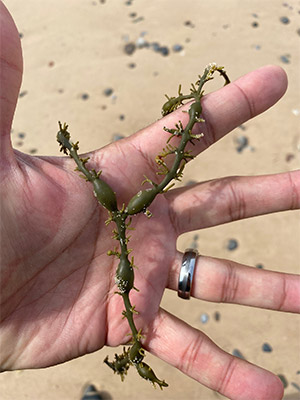 This was fascinating seaweed, one of several different types that had washed up. It had a stiff texture.

And the seaweed is… the Knotted Wrack! 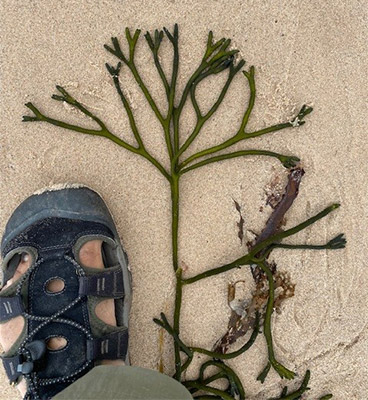 This seaweed had a much springier texture, soft but firm. 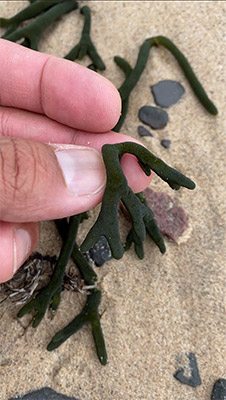 Seek identified it as the Dead Man’s Fingers, Codium fragile. It was strangely delightful to the touch. 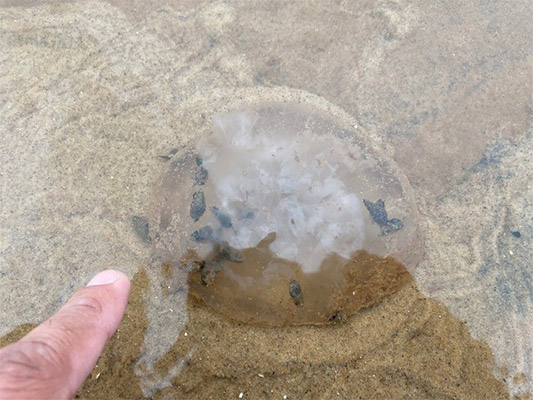 This Greater Moon Jelly (Aurelia labiata) would no longer be plying the waters. 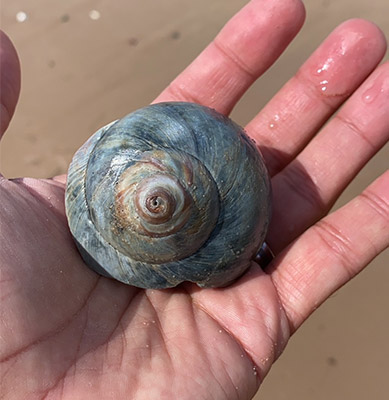 The Shark Eye (Neverita duplicata) is a species of predatory sea snail. I’m glad this shell was empty! 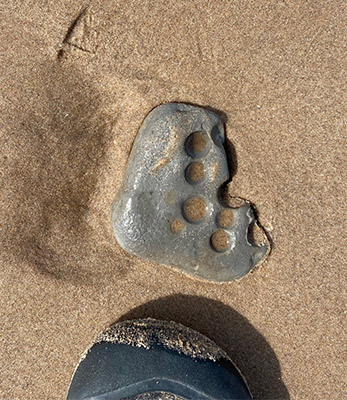 Seek can’t assist with non-living things. If you can provide any insight on this stone with hollows bored into it, please let me know! 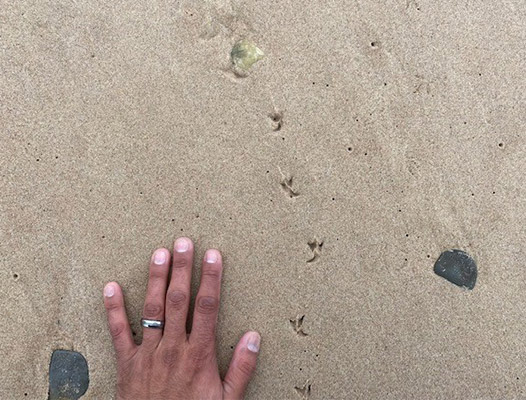 Seek also doesn’t assist with animal tracks. Who might have made these little pigeon-toed tracks in the beach? Let me know if you think you have the answer! The mystery will be revealed in the next e-News!

We will be visiting the beautiful landscapes of the Magdalen Islands on tour next June to explore its habitats and beachcomb too. Click here to learn more! 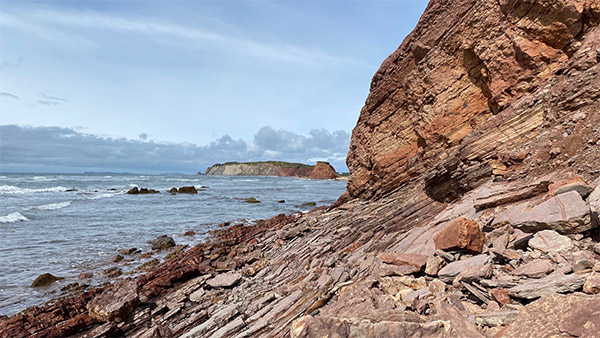 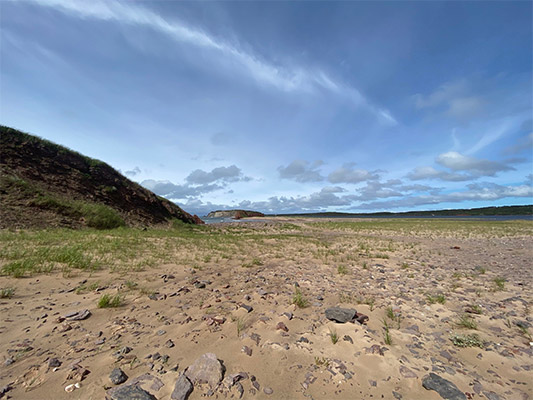