Bonnie Chartier was born and raised in Churchill, Manitoba. As the daughter of a trapper, she spent many hours on the land learning about the local flora and fauna and gaining an appreciation for the outdoors.

Bonnie has been involved in Churchill’s tourism industry since its inception and was instrumental in introducing the world to Churchill’s Polar Bears, Belugas, birds, and natural history. The Manitoba Government recognized Bonnie for her entrepreneurship in the tourism industry with Manitoba Business Woman of the Year Award.

Early on in her career, Bonnie discovered her passion is birding. She has since become well known and highly regarded in the birding world for her expertise. Some years ago, she teamed up with Dr. James A. Lane and co-wrote the first of three Lane Publications, “The Birds of Churchill” books in conjunction with the American Birding Association. She is also heavily involved in Manitoba’s Bird Atlas program, putting in hundreds of volunteer hours and thousands of kilometers mapping birds of Manitoba. In her spare time, Bonnie travels the globe pursuing her interest finding rare birds to cross off her “most wanted” list and moving on to the next. Anyone who meets Bonnie will appreciate her tremendous wealth of knowledge! 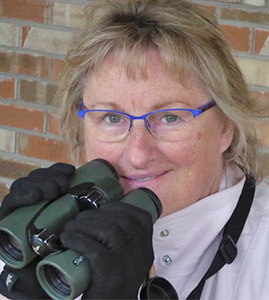