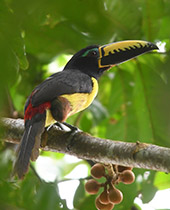 Picture yourself for a moment in a steamy rainforest in southeast Asia. You’re here in the Danum Valley, deep in the wilds of Borneo. Gargantuan trees with names such as Shorea and Dipterocarpus tower towards the sky. Various cryptic songbirds such as bulbuls and babblers vocalize from somewhere unseen. The steady drone of cicadas signals that the afternoon will soon be over, the day transitioning to night. Suddenly, a massive shape gliding into the top of a nearby fig tree grabs your attention, followed shortly by a second figure. These birds are unmistakable. With a wingspan of over four feet, black plumage with a banded black-and-white tail - and the most distinctive feature of all - a big bill with scarlet and yellow casque curling upwards, these are Rhinoceros Hornbills. The pair has picked this particular fig tree to feed on abundant fruits that are produced at this time of year. Following their late afternoon meal, the pair duets – loud, prehistoric honks that gradually evolve into raucous laughter – and takes flight, gliding off into the evening. 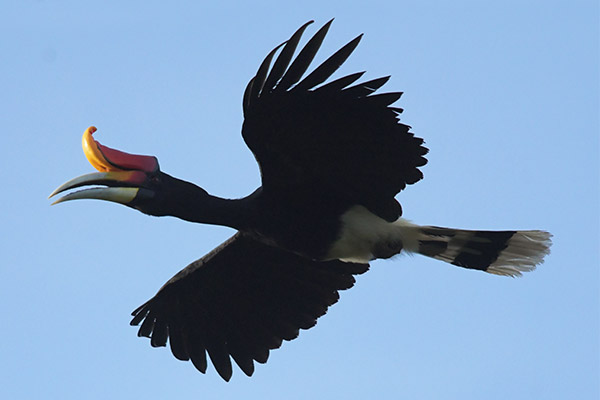 Rhinoceros Hornbill in Borneo
© Josh Vandermeulen
A similar story unfolds in the rainforest of South America, far up the Río Napo in the Amazon region of Ecuador. The flora and fauna here are all different, of course, though they share some similarities if you look closely. Here, it is the stately Ceiba and Dinizia trees that reach towards the heavens. Different songbirds such as antbirds, wrens, and flycatchers vocalize from somewhere unseen. As you stand along the banks of an oxbow lake, two large shadows glide over your head and settle in a nearby Cecropia tree. With their huge wingspans, black and white plumage, and massive black bills edged with yellow and blue trim, you recognize them as White-throated Toucans. They feed on the tree’s nutritious fruits before gliding off into the forest. 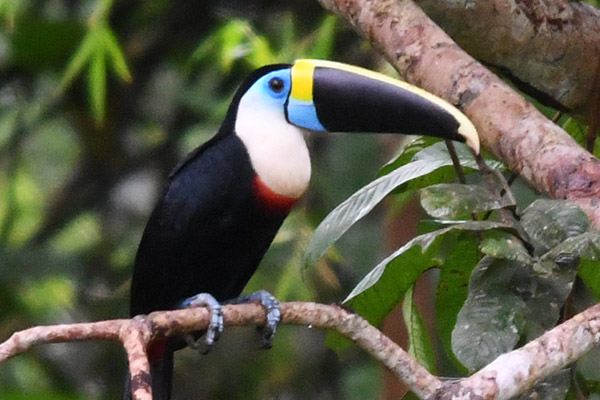 White-throated Toucan in Colombia
© Josh Vandermeulen
One could be forgiven for thinking that the hornbills of the Old World and the toucans (which also includes the birds called araçaris and toucanets) of the New World tropics are each other’s closest relatives. They do, after all, share some striking similarities. For example, both groups sport ornate, massive bills. Both make their nests in tree cavities, for the most part. And both fill similar niches in their respective environment - large frugivores (fruit-eaters) that inadvertently assist with dispersing the seeds of fruit-bearing trees. 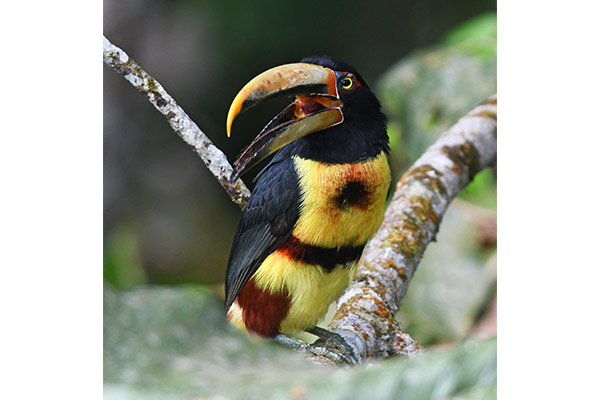 Collared Araçari in Ecuador
© Josh Vandermeulen
But in truth, they are not at all closely related. The ancestors of hornbills and toucans actually diverged on the evolutionary tree approximately 50 million years ago. Hornbills are members of the order Bucerotiformes. Toucans, on the other hand, fit within the order Piciformes, which includes woodpeckers! 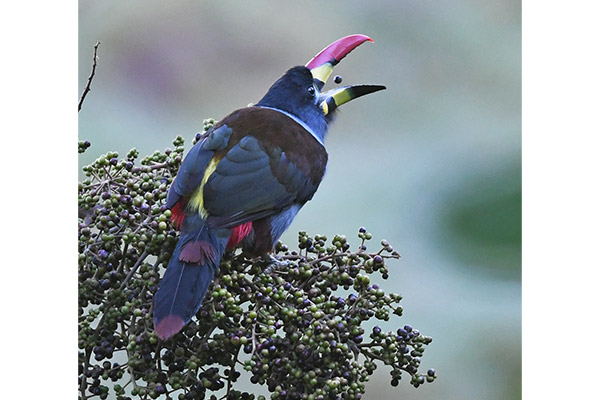 Gray-breasted Mountain-Toucan in Colombia
© Josh Vandermeulen
The similarities between hornbills and toucans are a classic example of convergent evolution – that is, the independent evolution of similar features among organisms that are not closely related to each other. Hornbills and toucans have evolved to fill similar niches in the Old World and New World respectively, and so the forces of natural selection have pushed them to evolve similar morphological features. 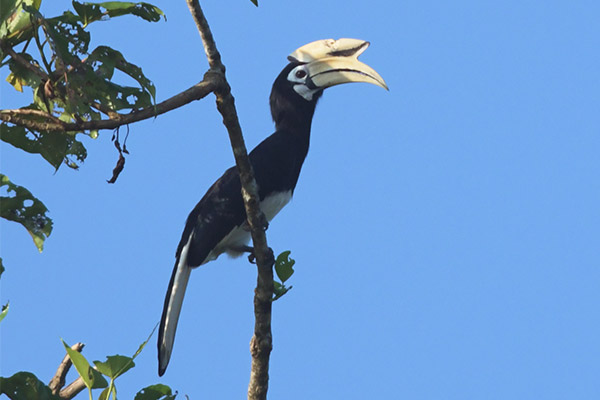 Oriental Pied Hornbills in Borneo
© Josh Vandermeulen
The hornbills and the toucans do exhibit some notable differences, which is expected given they are not closely related. Convergent evolution will only take things so far, and the ongoing forces of natural selection effect change in different ways, in different ecosystems; for example, hornbills have evolved casques on top of the bill. Some species exhibit prominent and boldly colored casques, while other hornbill casques are merely small ridges. Scientists believe that the casques can serve multiple functions such as amplifying vocalizations and providing additional reinforcement to the bill when the bird is excavating a nesting cavity using its bill. 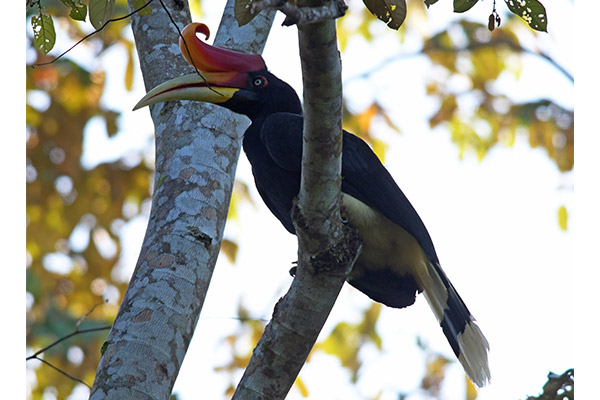 Rhinoceros Hornbill in Borneo showing its ornate, curl-tipped casque
© Josh Vandermeulen
Toucans, meanwhile, do not have casques. Their huge, lightweight bills actually assist in temperature regulation. Toucans can radiate a large amount of heat away from their body by flushing their bills with blood. Essentially, a toucan’s bill is an air conditioning unit! 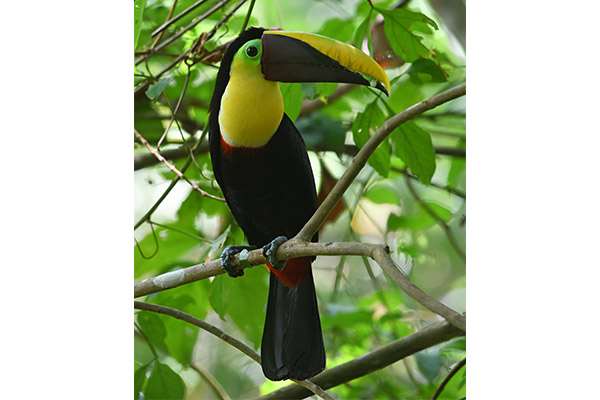 This Yellow-throated Toucan in Costa Rica can keep itself cool thanks to its large bill
© Josh Vandermeulen
In the lowland rainforests of both Borneo and Amazonia, a surprising diversity of these large fruit-eating birds can coexist with each other. In these mega-diverse forests, there are enough resources to go around and so different species will exploit slightly different niches. This begins with their diet. For example, in the forests of Borneo, the Helmeted Hornbill feed on large figs, the Rhinoceros Hornbill prefers medium figs and the Black Hornbill chooses small figs. Several other species - the Wreathed and Wrinkled Hornbills - eat oily fruits, while the White-crowned Hornbill has evolved to feed mostly on small vertebrates. 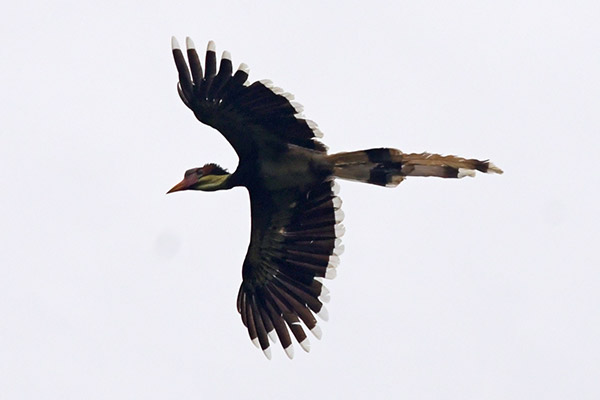 The Helmeted Hornbill in Borneo is a large fig specialist
© Josh Vandermeulen
A similar situation unfolds among the toucans in South America’s Amazonia region. The size of the preferred fruits reflects the bird’s bill size. The White-throated Toucan eats the biggest fruits and the Channel-billed Toucan prefers medium fruits, while the dainty Golden-collared Toucanet chooses the smallest fruits, along with a healthy serving of insects and small invertebrates. At least four species of araçaris also co-exist in these mega-diverse forests, and each of these prefers a slightly different medley of various fruits, insects, bird eggs and small vertebrates. 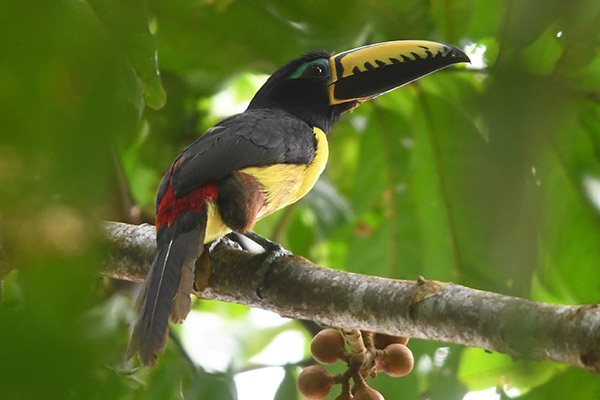 Lettered Araçari in Colombia
© Josh Vandermeulen
Are you interested in seeing hornbills or toucans in the wild? We offer a number of different tours that allow you to see these superlative birds along with so much more. For example, the following are some of the tours on which you can see hornbills in 2021 and 2022:

Toucans (including toucanets and araçaris) can be seen on these upcoming tours:

We hope to host you on one of these tours!
Full Webinar Library